Upon completion of this lesson students should be able to:

Blasting is the process of breaking rocks into small pieces by use of explosives. 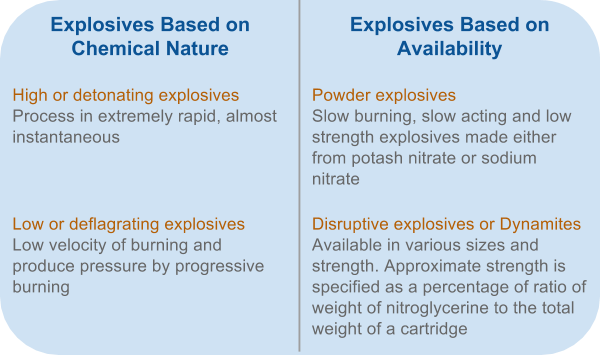 The most important responsibility of the blaster in charge is to prepare and fire safely. They are to practice safety in transportation, storage, handling, and the proper use of explosives.

Hazards in Use of Explosives

A misfire is a loaded hole that fails to fire. The procedure following firing a round is that the blaster or supervisor will inspect the muck pile for misfires. No one else is permitted to enter the area until the all-clear signal is given.

Overshooting results from either an excessive use of explosives, an improperly sized drill hole, or holes that are not properly placed according to the delay pattern. Undershooting is just the opposite. Overshooting weakens the remaining deposit making it susceptible to falls and may require use of supports. Undershooting results in an uneven face and creates haulage problems by having to move larger sized rocks.

Fly rock consists of pieces of rock blown from the shot area by the explosive force. This rock can be lethal because of its , weight and velocity of travel. Flyrock is also caused by a blowout. When a blast hole is not drilled deep enough into the rock, the explosive force blows the rock out into the drift or work area.

Electrical hazards are present if the mine uses electric blasting caps.

Never drill into a bootleg – it could contain a charge of powder that might detonate when struck by the drill steel. Prior checks of the hole may have accidentally not detected the powder, so do not take any shortcuts.

Clearing the blast area is very important. Unless the area is secured, other people may unknowingly walk into a life threatening situation from either the blast itself or the toxic fumes that follow the blast.

Before resumption of work, a supervisor or blaster will inspect the blast area for misfires and fumes. No one should enter this area past the guards until the all-clear signal is given by this person.

Any miner who discovers an undetonated explosive near a magazine or along a haulageway, or a misfired explosive near their work area shall halt work, clear everyone out of the area and guard it, and notify a supervisor about the hazardous situation. Never attempt to move the explosive yourself because it may be very unstable and could go off in your hand.

This program is made possible by a TAACCCT grant, which provides community colleges and other eligible institutions of higher education with funds to expand and improve their ability to deliver education and career training programs that can be completed in two years or less, are suited for workers who are eligible for training under the TAA for Workers program, and prepare program participants for employment in high-wage, high-skill occupations.