Each bath type has its pros and cons.

This lecture will deal mostly with the Shallows Baths since they are the most common in the U.S.

Prior to feeding coal to the DMV, the correct dense medium is pumped into the vessel through the feed washer manifold and the purge hoppers.

The vessel is filled until it is freely overflowing.

The proper inflow of medium can be estimated to be 260 gallons/min for every foot of overflow weir length.

The coal is then fed to the HMV through the Feed Manifold.

The depth that the feed is injected should be minimized to avoid possible bypass of light particles to the tailings stream.

A feed sink plate is used to direct the feed downward into the vessel so that particles do not ‘raft’ across the width of the bath.

Approximately 10% of the dense medium enters through the purge hoppers.

10% of medium needs to report through the purge hoppers.

Dense medium cyclones (DMC) have been found to be effective in treating particle size fractions between 3-inch and 100 mesh, however, not typical done in a single unit.

The DMC application for treating 16 x 100 mesh material is limited due to significant magnetite loss resulting from inefficiencies on the drain-and-rinse screens.

The ability to treat particle sizes from 3 to 1 inch is a result of the development of large diameter DMC units in the late 1990’s. Cyclone diameters greater than 1 meter are currently available having mass throughput capacities approaching 500 tons/hour.

The ability to efficiently treat a large particle size range of 3 inch to 16 mesh in one process unit has revolutionized the design of coal preparation plants by reducing the number of required circuits.

Like classifying cyclones, an air core is needed through the middle of the cyclone to ensure proper directional movement of the inner fluid toward the Vortex Finder.

Unlike classifying cyclones, DMC units must be installed in a near horizontal position, which is typically 10o from horizontal.

The reason for the near horizontal position is that, in the vertical position, the gravitational pull on the dense medium results in a slumping of the medium toward the apex, which pinches the air core.

Under a ‘slumping’ condition, the separation efficiency would be very sensitive to inlet pressure and medium viscosity.

Other factors favoring a horizontal orientation include the ease of piping for both gravity-fed and pump-fed systems and a reduction in head-room requirements. 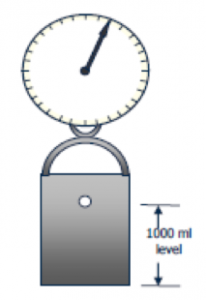 Low feed pressures of 10 to 20 psi are used to maintain a stable magnetite suspension and reduce wear.

Interestingly, medium density has no effect on feed rate.

Medium -to -Coal Ratio=Volume of Medium: Volume of Coal

For example, the feed rate to a DM separator is 400 ton/hr of coal which has a relative density of 1.60. The desired medium to coal ratio is 5:1. Determine the amount of medium needed in gallons/min with the example below:

The ratio minimum in the feed is related to hindered settling effects. High solid concentrations slow the movement of particles to their respective process streams leading to inefficiencies

As you may recall, it is advantageous to minimize the Apex-to- Vortex Finder diameter ratio (DU/DO) to reduce the effects of ultrafine by-pass.

In DMC units, the DU/DO ratio is generally higher and can approach a value of unity.

As the DU/DO ratio approaches unity, the overflow rate falls and the underflow rate increases.

To ensure proper operation, the medium-to-coal ratio in the underflow should be maintained above 1:1.

Vortex Finder Overloading exists when the vortex finder is too small to accept all of the floatable material reporting in the feed stream.

When a low volumetric amount of medium reports to the overflow, coarse low- density particles are unable to exit.

Medium-to-coal ratio in the overflow stream should be maintained above 2.5:1.

Particle retention in DMC units occur due to density gradients being formed within the unit.

Retention occurs because particles of a given density, typically the middle density fractions, have the inability to penetrate the high density layers and report to the underflow stream. As such, they remain trapped between density layers.

If the feed medium-to-coal ratio is low (< 6.0) and the feed contains significant amounts of near density material, the amount of particle retention can be significant.

However, as long as the particles are continuously removed through one stream or the other, the effect of particle retention is minimal.

Large particles, however, tend to build up large loads in the cyclone and then spontaneously release the load through the apex. This process is called surging and rarely occurs when the feed top size is below 15 mm.

Coarse particle retention and surging are characterized by the following partition curve.

To reduce or eliminate particle retention, the difference between the medium density of the overflow and underflow streams (Ïu — Ïo) should be less than 0.40 RD units.

To reduce the density difference, the following actions can be used:

He and Laskowski showed how medium viscosity negatively affects efficiency.

Increase in medium density and contamination as well as a decrease in magnetite particle size elevates viscosity.

Less than 20 centipoise is recommended.

The following model was developed by the JKMRC Research Center in Australia and described by Chris Wood (1990).

The model and steps of the scale-up procedure will be presented through the development and solution of an example problem.

A preparation plant is being designed to treat 700 ton/hr of ROM coal containing an average of 5% moisture (air-dried basis). A nominal 30 x 0.5 mm fraction comprises 80% of the total ROM feed and will be cleaned using DMC units. The required product grade is 7.5%. The washability analysis of the feed material is provided in the following table.

Step 2: Estimate the Densities of the Feed, Clean Coal and Rejects

Step 4: Selection of the Number and Geometry of DMCs

Magnetite costs have become a significant operating expense with the prices ranging from $160-$300/ton.

Most of the loss occurs at the drain and rinse screen.

The majority of the lost magnetite is associated with adhesion to the particles in the clean coal and reject streams.

An expression was developed by the Dutch State Mines researchers that quantifies the amount of magnetite Qm (liters/ton) adhering to the coal and reject as a function of particle size ds (mm) and density Ïs:

Obviously, if drainage only was used to recover the magnitude, a tremendous magnetite loss would be realized, even for the coarse coal application.

Commonly employ 0.9 and 1.2 meter diameter units that range up to 3 meters in width

The counter-rotation unit is the most popular due to elevated magnetite recovery.

In the counter-rotation unit, the drum rotates against the inward flow of dilute medium. As the medium passes through a slot having a preset depth, magnetite is attracted to the drum. The drum can be adjusted to obtain different medium depths.

Losses are typically no more than 0.25 grams/liter of non-magnetic product.

This program is made possible by a TAACCCT grant, which provides community colleges and other eligible institutions of higher education with funds to expand and improve their ability to deliver education and career training programs that can be completed in two years or less, are suited for workers who are eligible for training under the TAA for Workers program, and prepare program participants for employment in high-wage, high-skill occupations.